What is Far Infrared?

What is Far Infrared (FIR)?

Far infrared (FIR) is a region in the infrared spectrum of electromagnetic radiation. FIR is often defined as any radiation with a wavelength of 15 micrometers (µm) to 1 mm, which places FIR within the CIE IR-B and IR-C bands.

Infrared radiation lies entirely outside the range of visible light, so we can’t see any part of this radiation.  Infrared is typically separated into different sections according to its wavelengths.  Those sections include near infrared – Infrared A (IR- A),  mid-infrared (IR-B), and far infrared (IR-C).

Approximately 50% of the energy generated by your own body is in the form of FIR. So FIR is completely safe. (J Cardiol. 2008)  The human body generates FIR between 6-50 microns. 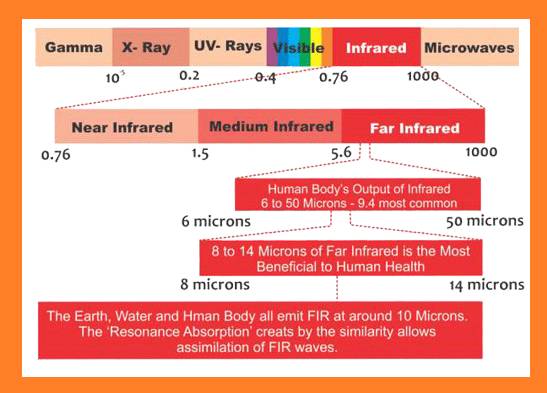 There is limited moderate evidence that FIR therapy normalizes blood pressure.  However, medical researchers from Germany concluded that a one-hour session of FIR therapy can significantly reduce blood pressure levels—as a result of a persistent dilation of peripheral blood vessels. They also noted that blood viscosity will improve.

According to the Archives of Dermatological Research, infrared radiation (including FIR) suppresses sunburn cell formation induced by ultraviolet B).

According to a 2015 study conducted at the Department of Radiology in Taiwan, FIR therapy causes beneficial effects on nerve function.  In addition, the study found that far infrared can be used as a novel treatment for different peripheral nerve diseases and injuries.  A recent 2019 study also confirms that FIR stimulates cell regeneration and promotes healing.

Allergic rhinitis (also known as hay fever) is a type of inflammation in the nose that occurs when your immune system overreacts to allergens in the air.  A 2007 study conducted by the Engineering in Medicine and Biology Society suggests that FIR therapy improved the symptoms of nasal itching, nasal stuffiness, eye itching, sneezing, and rhinorrhea.  These researchers found that FIR therapy is an important, novel treatment of allergic rhinitis.

Biomedical researchers have experimented with the use of FIR emitting ceramics which are embedded into various fibers and woven into the fabric of garments. These researchers noted in subjects a “delay” in the “onset of fatigue induced by muscle contractions.” They propose that this ceramic-emitted FIR (cFIR) has the potential to promote cell repair.[1]   Numerous research papers also studied the biological effects and medical applications of FIR.

As you can see, FIR is reputed to offer an astounding range of potential therapeutic effects and benefits — in research conducted across the globe.  The simplest way to receive the benefits of FIR is to get a pair of Ezekiel-Ion negative ion & FIR energy computer glasses 🙂